A visit to the Lee farm 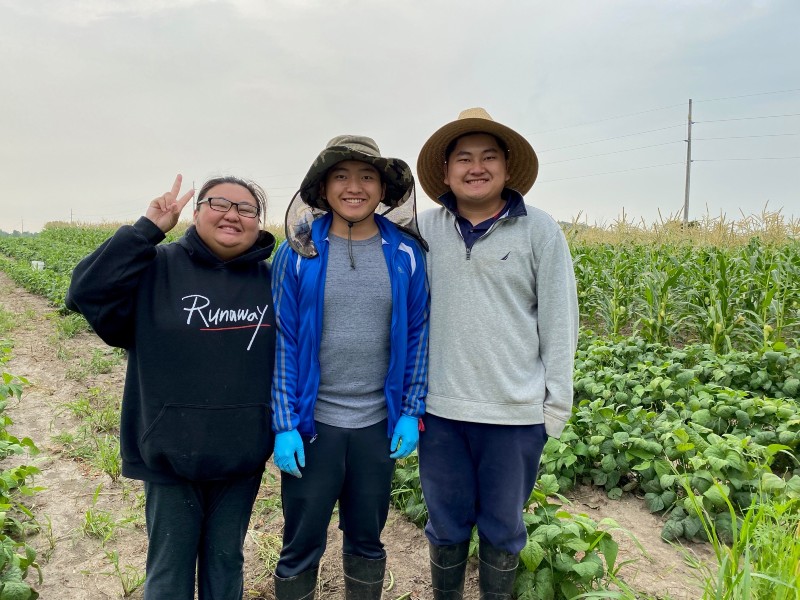 It’s a hazy morning in the middle of a hot, dry season when we visit Gaonou Lee and her family at their farm in Corcoran, MN. Five members of the Lee family are at work in the field as we wind our way along the bumpy farm track. We show up “bright and early” at 8:30, but Gaounou and family have been at the farm since 5:30. They are harvesting produce to be sold at the Maple Grove Farmers Market the next day.

The pandemic had delayed our visit by a year. Gaonou’s uncle and aunt were Maple Grove vendors for many years. They decided to stop actively farming in 2020 and Gounou applied in their place. Under these circumstances, we like to visit the farm to get to know our new vendors a little better and learn about their growing practices.

Gaonou and her father, Tongwa Lee, led us on a tour of the farm. Tongwa began farming in 1984 when he came to Minnesota from Laos. He was mentored by an uncle who grew produce to sell at Twin Cities-area farmers markets. Tongwa and his wife Xong Khang have farmed continually since that time. The family currently attends four farmers markets each week: Maple Grove on Thursday, New Hope and Lyndale (Minneapolis) markets on Saturday, and the Lyndale market again on Sunday.

On Monday and Tuesday, the family works on the farm–weeding, planting, watering, staking, and fertilizing. On Wednesday they work together to begin the week’s harvest, picking and packing until about 12:30, when they head back home for an hour’s rest. The remainder of the day is spent trimming and cleaning produce in preparation for the Maple Grove Farmers Market on Thursday. Then:

“We pretty much stay home in the winter,” Gaonou told us with a smile.

Five members of this family of eight are involved in the weekly tasks of produce farming. Others pitch in as needed, and Gao’s grandparents often come to the farm to visit and talk.

“I’ve always told my kids to stay in school,” said Tongwa of his six children. “I don’t want them to start a job – a hard job – right after high school and get used to that pay check. I’ve always told them ‘I will farm to help send you to college and then you’ll be able to get an easier job in an office.'” The wisdom of this plan is becoming evident, as the family celebrated a son’s recent college graduation and looks forward to an older daughter’s completion of a master’s degree.

Several important strategies are evident as we tour the farm. Tongwa is especially grateful for the farm’s heavier clay soil structure in this dry year. Clay tends to hold the small amount of rain we’ve received. There is no water source on the property, which means that water brought from home must be carefully rationed for the highest-value crops, like tomatoes. Watering is time-consuming and much less effective than rainfall.

The Lees also plant several successions of each crop to ensure a consistent, high-quality supply of their most popular crops for customers. For example, four green bean plantings are spaced out over the course of the season. When one planting is finished, the next is mature and ready for harvest. Growing conditions (like heat and drought) have a huge impact on how quickly or slowly a crop is ready.

They also plant a LOT. (13 acres is a mind-boggling amount of fresh produce.) “We don’t use sprays, so we always have to think about the bugs,” said Gaonou. “Sometimes the insects take the first planting of a crop but then the second one is ours to pick.” Deer and raccoons are also frequent visitors, helping themselves to corn, peas, beans, and whatever looks tasty.

Crops are rotated to a new location on the farm each season to promote soil health and help to control pests. The Lees have been growing produce on this 13-acre plot since 2014. Each year, they must re-negotiate the rent. The land is currently up for sale, but the owner has assured them that they can continue to farm there until a new owner is found.

Find Gaonou and family at market every Thursday in the NW corner of the market. They asked that this article conclude with their sincere thanks for shopping at the market and purchasing their produce. “Without the customers’ amazing support there would be no Gaonou’s Farm today.”

August at the Farmers Market: What’s in Season?

Market FAQ: An August update to help you plan your visit.